Since I quite frequent www.naturallycurly.com and their forums, I was excited when they announced they were having a pool party in NYC! I was least excited that they said you had to wear swimsuits, but I guess I wasn't the only one because they did away with that rule. The main focus of the event was to let people with natural hair know that they should not be afraid and can go swimming with their natural hair. There were representatives from Jane Carter Solutions (she was there herself), Hair Rules (owner Dickey was there as well), Ouidad and SheaMoisture. The cost was $25, but with a coupon code, you could have gotten $5 off. Come on, $20 for an event at a posh boutique hotel poolside where you get to mingle with other curlies, try products, see demonstrations, hear great music, get a $50 gift bag, and the chance to win an iPad and other prizes?!! I'm in! I told my cousin about it and we got our tix and were amped! She was especially interested in how to keep the form of her twist-outs.

I decided to wear a romper with my bikini under even though I had no intention of swimming since, well, I can't :/ I'm more of a poser :D 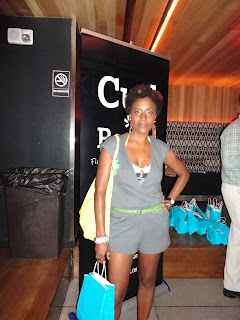 My cuz also wore a romper, she looked adorable! 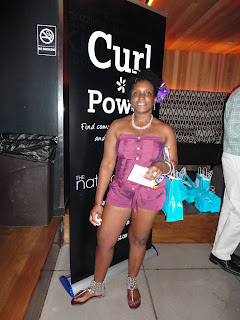 Of course, the MTA was being its normal self and made us later than we wanted, but we still got there in good time. When we walked in we got our gift bags right away. The ambiance was great, nice "club" lighting with ladies mingling and snacking in the first room with the bar, then around the corner poolside was where all the action was. Ladies swimming, others sitting and chatting, the dj and SheaMoisture were set up upstairs on one side. We checked them out and got some samples of their Raw Shea masque and some body scrubs and just scoped out the venue from high up. Then I spotted there was another section to the other side, wow, more?! So we went back down and back up to the other side. That place was buzzing. Jane Carter, Hair Rules and Ouidad were set up over there and it had normal lighting so you were able to see products and read labels and pamphlets. They even had someone re-twisting locs.

We went to JC first, she was so sweet. I basically told her that her Curl Defining Cream didn't do much for defining my curls for a wash-n-go, so she put a bit in my hair and did a finger-twist. I took that to mean that for my hair type, maybe it's best used for twist-outs. So I will try that. I actually didn't go to Ouidad, and Hair Rules was a mob scene! So we just took in some music, man that dj was good! They did the prizes shortly after, which I didn't win, I don't know what the deal is with that. We went back to the bar area and got a drink, whoa, hi there, $16! Hehehe, fine, it was the city and a hotel, we get it ;) Karen Tappin of Karen's Body Beautiful popped in, her hair was FIRE! I snapped a pic with her and we chatted, she remembered me from the Huetiful event at her store. We spoke about different peoples' perceptions of natural/curly hair. Then I saw Jane Carter by the bar, we also had a chat and she spoke about why she started her line. Basically she had an allergic reaction one day to some products and decided to start her own. Why the heck don't I think of these things? She gave us some more product recommendations. She really is a nice person, she said she felt like a celebrity when I asked for a picture because in NJ no one recognizes her. Ha! I actually didn't even know she was right here in NJ. Taren916 was also there, man do I love her YouTube videos. She was probably the first person I subscribed to when I first cut off my locs back in April. She's done a big chop since then, and still looks fab. When I saw Michelle of NaturallyCurly, I told her that I'm on her site basically all day and she said she wanted to interview me, so I met her outside and she asked me some questions with her iPhone 4 (that phone can do anything apparently) and I had to pretend I wasn't nervous and gave her answers. Let's hope it turned out okay! I love events like this. It was nice meeting the people who's products you use and chatting with other natural ladies with similar hair in different styles. It gave you style ideas, encouragement and just a "feel good" feeling about your hair. 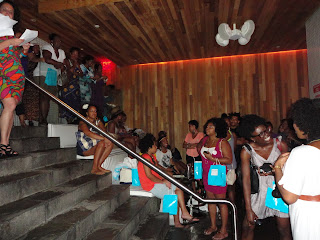 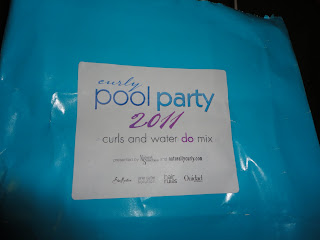 SheaMoisture Coconut & Hibiscus Curl & Shine shampoo, 4oz
Jane Carter travel sized Curl Defining Cream and Revitalizing Leave-In
Hair Rules travel sized Nourishment Leave-In Conditioner
Ouidad Climate Control Heat & Humidity Gel, 6oz
I also grabbed samples along the way. This is a great way to decide if you like something without committing. Like I discovered that I love the Shea Moisture body scrubs and I now have to purchase one!

I can't wait for the next curly girl event which should be at Karen's Body Beautiful in two weeks.


** I apologize for the delay, I wrote this since July 29th and had it sitting as a draft until now! **
Posted by makeupbykifana at 12:43 PM 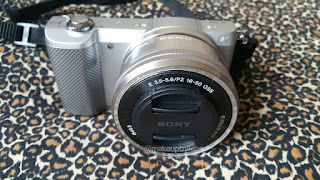